He obliged and I came out of the cab with my phone to take a photo of the signpost. 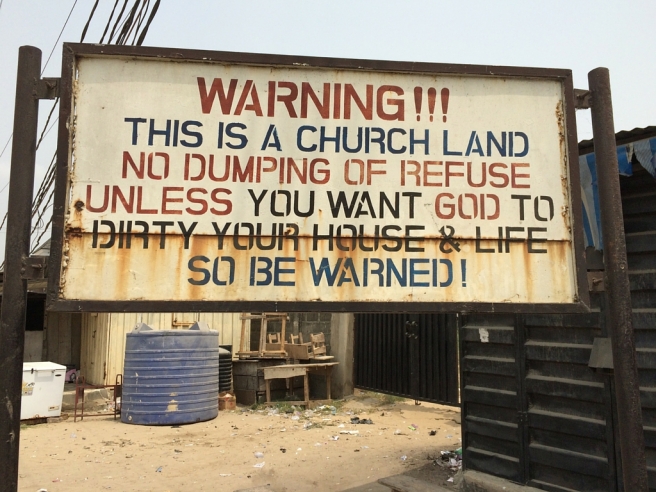 “Why did they put up the sign,” I asked the driver, shaking my head as I returned to the car and put on my seat belt. “Do you think people will obey?”

“The first problem,” he said, “is that the people that it’s supposed for can’t even read it. When they see it, they will think it’s about 419.”

I nodded recalling the caveat emptor signs commonly seen on buildings and plots of land: This Property is Not For Sale; Beware of 419.

But, I was not sure if he had correctly estimated the literacy level in Lagos, Nigeria, because I was using the people in my circle, who can all read and write, as a gauge for the rest of society.

“Hmmm do you think it is fair for God to dirty their lives if they can’t read the sign?” I chuckled at the image in my mind of an angry God with smoking nostrils, waiting to rain trash on dissidents.

“I don’t know why they have to bring God into this matter. This thing is simple.” He went on to describe the current system of refuse collection initiated by the local government authorities.

“See,” he slowed down and pointed to a refuse heap, “they can throw their rubbish here . . . but only those who have paid, those that have cards.”

I have written about voluntary compliance before, marveling that Nigerians need the brutal arms of uniformed men to coerce compliance out of us like malu congo, yama yama congo—a derogatory chant that I cried out as a girl. It was aimed at cows being driven with a stick by a herdsman intent on the cows doing his bidding.

But as the driver and I exchanged ideas about efficient systems of refuse disposal and the role of government and religion, I observed that humans in general, were wild at heart, bucking at authority and searching for short cuts. That if law and order seemed to prevail in the western world, it wasn’t so much the result of “civilization”, but the result of sophisticated systems of policing—a speed camera mounted on a busy street ensured compliance without invoking the wrath of God.

I asked the driver what he thought people who aren’t able to pay the fee for refuse collection should do with their garbage.

He had come full circle and now embraced a premise he had earlier rejected, why bring God into this matter? He (and I), had done more thinking about a social problem than we normally would have and that was not a bad start.

He brought me back to the present by interrupting my thoughts with a double entendre.

(Abeg) leave trash for LAWMA– a hashtag on Twitter, the result of feuding between two Nigerian music producers. It has morphed into a slang that means (among other things), please talk about something else.

37 thoughts on “Leave Trash For LAWMA”