A lot has been written about hazards such as driving in Lagos and on Nigerian roads. I do not mean to flog the issue, but it was this very thing that revealed some needed home truths.

You see, I am not one to allow my blood pressure levels rise over a little thing like another driver cutting into my lane without permission. The lack of simple courtesies that supply grease for smooth driving relations leaves me unruffled. Watching other tense drivers gripping their steering wheels for dear life as they struggle not to be outmaneuvered, provides witty relief from the unending traffic.

These hooligans—both the ones in black suits and the ones sooted from the ash heap of life—have shown me that aggression is the normal way of life here. The proximity of Lagos to the serene breeze from the Atlantic has done nothing to cool the pepper that burns in their veins.

On the roads, tempers edge dangerously close to boiling point, so, loud arguments and disputes settled with fistfights are not uncommon. No wonder I gave up eating pepper long ago, cucumber is more my style. But, I was soon to discover that the cherry does not fall far from the tree.

Nigeria, a place we all call home

Anger that constant simmering over decades of rape

Independence, a cherished hope; the impetus to rise again at 4 a.m.

Jaded after half    a century of promises unfulfilled

Affection, a feeling that continually binds us to the Motherland

Two weeks ago, my driver was going nose to nose with another vehicle. Normally, I would have cautioned him and asked him to yield to the yeye driver, but that day was different. Whether it was the roaring inflation or soaring unemployment, I cannot tell. It may have been the cumulative effect of bumping my head against the car window as my driver navigated one pothole-ridden street after another. Perhaps it was the sinking feeling that yet another con artist promising much and delivering little had swindled me. Whatever, I was tired of being a fool. My redundant aggressive genes surfaced. “Do not give him any chance,” I warned.

Both their countenances showed strong determination. A mad rush of blood had made the veins visible on their hands and temples, a sign that neither wanted to lose this race for survival. As my driver and I struggled to gain supremacy, he from behind the wheel, and me a cheerleading accomplice from the owner’s corner, the inevitable happened.

An ugly screeching sound rent the air as metal kissed metal. I had a taste of nauseating reality as the beat of the ancient talking drums in my head ceased. My driver jumped out, his rage fuelled by the sudden remembrance of his N5, 000 accident-free monthly bonus.

As he sparred with the other driver, I realized that their loud voices were a mere whisper in the buzz of a Lagos that never pauses. My car had finally been baptized with the telltale marks around the fender that speaks of a skirmish or two in traffic. After both drivers traded sufficient insults, they unanimously agreed that the scratches were not worth coming to blows over.

Rhetorical questions swirled in my mind as I tried to make sense of what had just happened. What was it that made my blood boil? How could I have Naijanized so fast?

Back home, my resourceful driver applied a little brake fluid to the scratches and the car looked almost as good as new. I guess it was a little insurance to secure his bonus. It reminded me of the shoddy patch jobs on our roads that are exposed by heavy rains. Yes, Lagos is getting greener on the outside, but true redemption must go beyond skin-deep.

As for me, years on foreign soil only camouflaged my leopard’s spots. The power of Naija, as the large billboards scream, can never be underestimated. 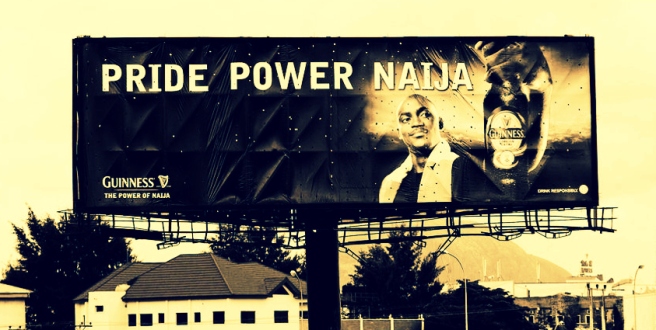 Yeye: a derogatory term used for an annoying person, thing, or situation.

Photo credit: e.r.w.i.n. / Foter / CC BY-NC
Title: PRIDE POWER NAIJA
Original image URL: http://www.flickr.com/photos/eherrera/4950205845/
Unauthorized use and/or duplication of this material without express and written permission from this blog’s author and/or owner is strictly prohibited. Excerpts and links may be used, provided that full and clear credit is given to Timi Yeseibo and livelytwist.wordpress.com with appropriate and specific direction to the original content.