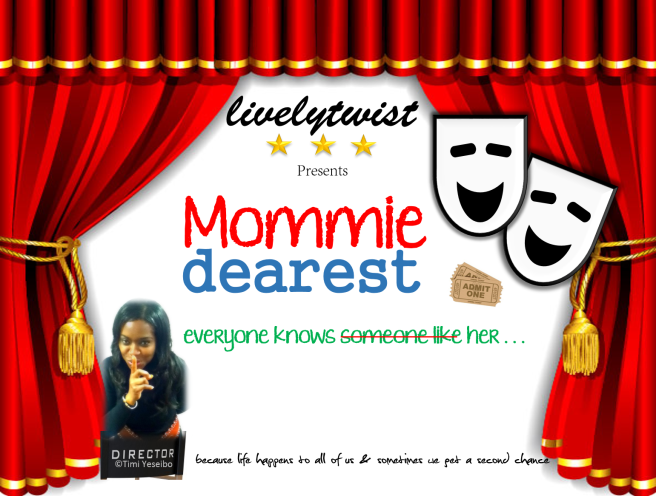 Her eyes opened. Six o’ clock. Panic clouded her brain. She should have already started her round on Ajeleke Street where the drone of generators and echo of the muezzin’s call, did not compete with her megaphone. Into that serene place, Mommie’s voice had boomed nearly every morning for the past two years. She was not careful as she bounded from bed.

In the sitting room, Ejiro, Ufuoma, and Yoma sat with arms crossed over their chests. Their stare reminded Mommie that her head-tie sat on her head at a lop-sided angle threatening to fall. In the corner, Lucky stood like a wallflower not daring to meet her eyes. She smelt sabotage. No one offered her a chair to ease her discomfort. She steadied her head-tie with both hands.

“Miguo Mommie,” they all chorused.

“This has got to stop. It must stop today!” Ejiro spoke first.

“Mommie, we are tired of you embarrassing us with your microphone!” Ufuoma spoke second. She did not observe protocol; Yoma was older than she was.

“We are not saying you cannot preach,” Yoma relaxed his hands as he spoke, “but surely there must be a better way.”

“Hmmm, I see.” She folded her arms over her chest, spreading her legs.

The men knew when to retreat, but Ufuoma continued.

“Mommie, you are the wife of the honorable chief judge. We live in Effurun GRA. You drive a V-boot. You are supposed to be a society lady. Carrying a loudspeaker and preaching on the streets makes you a common, common—”

Yoma looked at his mum who was now standing at akimbo and then at Ufuoma whose chest was rising and falling rapidly, “What she means is—”

“I know what she means! My ungrateful family! Ejiroghene when you wanted a promotion, you asked me to pray to the God that you are now ashamed of. Now that you have arrived, my serving God is an embarrassment enh?”

Ejiro pushed his glasses higher up on his nose. He regretted allowing the children persuade him to confront their mother.

Turning to face her only son, she spat out her venom. “Ogheneyoma who prayed and got you out of trouble time and time again? Who prayed until you finally got that Shell job?”

“You did.” Yoma sighed and stretched, he’d never liked waking early. He wished he had not come home for the holidays.

“Ufuoma, you, you? You of all people. Where do I even begin? Should I start with that useless boy Richard your—”

“Look, look, this is all getting out of hand. Mommie what we want to say is that we admire your fine Christian character, you are truly a virtuous woman; none would dare disagree. Your aggressive proselytizing with that thing,” Daddy gestured at the megaphone lying at Lucky’s feet, “only serves as a noise pollutant at a time when people are stealing the last vestiges of sleep. This militant evangelistic style coupled with your emotion-laden sales pitch is rather old. We are just saying that it’s time for new tactics.”

He stood and placed his hand on her shoulder, “Mommie, bikó.” Taking her right hand in his, he softened his voice, “You cannot browbeat people into accepting our faith since it is a work of grace, and grace is never more clearly demonstrated than in our actions. As Francis of Assisi said, ‘Preach the gospel all the time, and if necessary, use words.’”

“Ssssss! I thought you were going to say something constructive!” Mommie pulled her hand away and glared at him, “Ejiro, I don’t know which Bible you read that it has become our faith. The kingdom of heaven suffers violence, and the violent taketh it by force. The day that Muslims stop calling for prayer, Hare Krishnas stop dancing on the street, Jehovah’s Witnesses stop knocking on doors, and Cele start wearing shoes to church, that is the day I will stop preaching!”

She marched over to Lucky.

“Vre-ndo Lucky. Doh my pickin. Is everything set?”

Lucky handed her the megaphone and followed behind.

“Repent for the kingdom of God is at hand!” Mommie’s voice rang out startling Lucky as he turned the lock and lifted the latch to open the gate. She looked at him with a half-smile, “Charity must always begin at home.”

Once outside the gate, Mommie began to lecture Lucky. “We must forgive our critics. The Bible says that a man’s enemies will come from his own household . . .”

Lucky turned and followed her eyes. Surprise registered in his. Richard was escorting a girl to the junction that led to the bus stop.

p.s. Happy Mother’s Day to you. After many false starts, I wrote this caricature, which isn’t about us, because the places I had to go to write the post I wanted seemed too far; the emotions, too raw, bleeding as they did only yesterday.