And there it was again at the end of a well-written piece by an African-American about how his trip to Africa changed his worldview; the insults and tacky comments. I did not agree with what in my opinion were romanticized notions of Africa, and I intended to say so. I scanned the piece for points of agreement to acknowledge, so I could begin commenting. However, the vitriol in the comment section from those who agreed and disagreed, whether with the post or the ensuing comments, put me off. It would not be easy to defend myself from people like sixpackpower and beautifulbetsy. Moreover, my gravatar is a photo of me my boss would recognize and my name is Timi Yeseibo.

Is anonymity on the web like mob action? Normal people abandoning good sense to loot, rape, devalue, to the beat of crazy songs sung by thousands high on hysteria like LSD? Does an IP-address unshackle responsibility from freedom?

Beyond anonymity as gasoline for cyberthuggery, in a world of six billion people how can we all agree? Someone said, if only everyone were like me. I say no. Biko, do not populate the world with more people like me—do you know how boring I am? Our differences are not to be feared, but harnessed. You stretch my thinking and make me re-examine what I believe. In the end, we may find common ground, or you remain on the right and I on the left, all with respect. Can we just learn how to agree to disagree? Must web discussions on politics, sports, entertainment, religion, in other words, life, bring out the devil in us?

Sadly, some websites promote these kinds of verbal boxing matches and just as in ancient Rome, people troop in for a good fight, to watch gladiators at work. At its worst bystanders careen into the ring and die.

Our challenge is to find the compassion for others that we want them to have for us. That is emotional correctness. – Sally Kohn1

A few days ago, I read an engaging post advocating several candidates for political office in the 2015 Nigerian elections. To broaden my knowledge, I sought out opinions in the comment section. Two brilliant minds with opposing views held my attention. As the comment thread lengthened, their commentary lost substance and devolved into name calling as if their intellect had come to a full stop. When commenter one accused commenter two of shouting in capitals, commenter two defended himself by pointing out that his magnanimity was on behalf of the visually challenged. 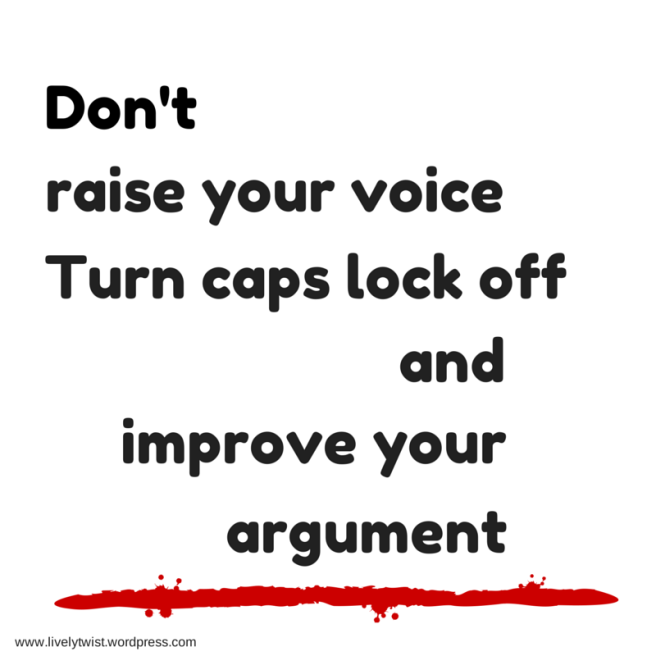 I laughed until I belly-fulled, then navigated to a less popular political website, where comments are permanently closed, as if to say, “Read, finish, carry your trouble and go!”

Hieroglyphic symbols may have sufficed eons ago, but since the web is predominantly text-based, our ability to decipher tone, mood, and body language is limited. Emoticons only go so far.

After trading points for a while, a friend and I deadlocked on the value of prayer. He said, “Let’s just agree to disagree.” I nodded although I thought a couple more points would push him to my side and a consensus. His hands, folded across his chest, told a different story.  If he had written, let’s agree to disagree, in the comment section and put a smiley at the end, would I have stopped? 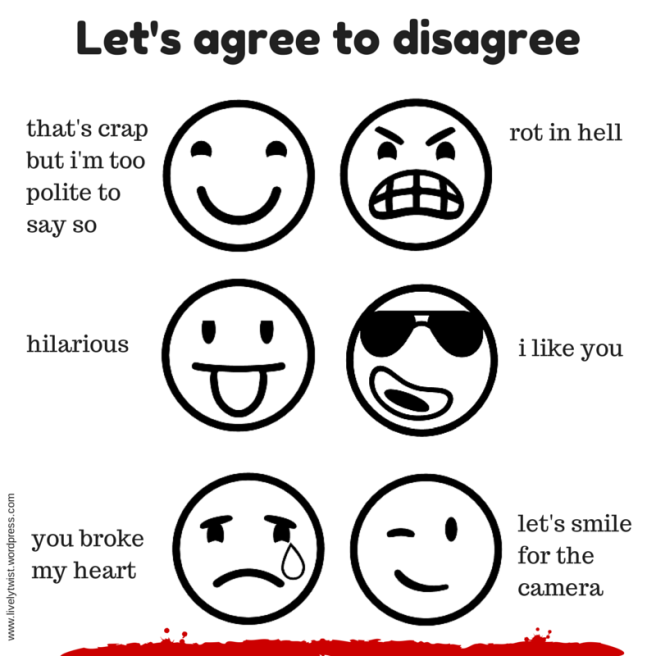 Having a quick wit and a repertoire of words at my disposal meant as my mother used to say, before you talk one, Timi has talked three, oya, go and study law, that is, winning arguments mattered more than winning hearts. Here’s something I’m learning that has lost me several arguments, but gained me friends or acquaintances and kept the discussion open longer: let the other person save face. Argue passionately for what you believe to be right—strip your “opponent” of logic, but leave his dignity intact. The converse is true, save your own face, don’t comment, even when you are right—walk away with dignity.

Despite our best efforts, we may be misunderstood because people read and process through filters. It helps to first suspend judgement and then seek to understand.

Finally, if you must insult me, if my post or comment inspires your disdain then confound me with your intelligence, charm me with savoir faire. At least do it with style.