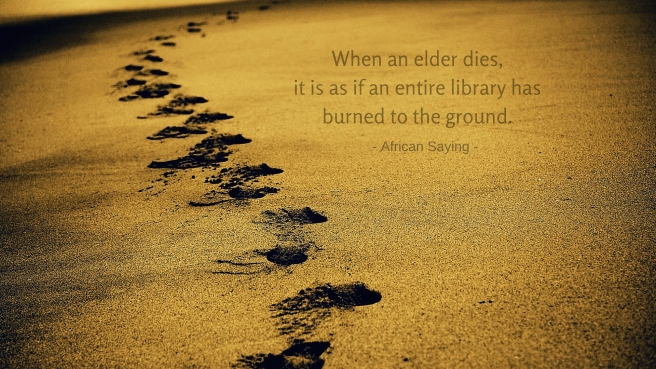 My grandmother was a darker smaller version of my mum. Parents do not resemble their children. It is the other way round, but that is how I keep my memory of her alive—in my mother’s strong arms, I see hers, ready to cradle the world. My mother tells me she was the daughter of a prince, who thought it a waste of time for her to acquire formal education and that she ran away from her first marriage due to harsh treatment from her husband.

She was kind. She only spoke her dialect and Pidgin English. I could neither speak nor understand her dialect. Her pidgin was the Warri-Sapele variety, which was difficult for me to understand and I barely spoke pidgin. Her eyes told me she had more to say than the little she did. She must have felt even more frustrated than I did; harbouring experience she could not transfer.

The conversations we managed to have, centred on her concerns that I could not speak her dialect. She would ask worry etched on her face, about what I would do when the war starts. I had heard about the Nigerian Civil War just as I had heard of World War 1 and 2, events in history, far from my reality. In her broken English, she would tell me how soldiers used language to determine if you were on the Nigerian or Biafran side. Those who could not speak their language were at the mercy of the soldiers.

Her stories did not motivate me to learn her dialect. I asked my parents where they had been during the war. “In Lagos,” my mum and dad answered respectively, and I filled in the blanks, “far from the war.” It showed in the priorities my parents chose for my life.

But those who have seen war speak of it with tremor in their voice. Does memory not erase the boom boom of falling bombs or the tikatikatikatika of machine gun rounds?

One time, she came to my university campus. Armed with my name and address she left her home in Sapele to visit me. When the driver who brought her came to call me, I hurried outside not believing. I met her smiling, and I loved her for taking a chance that she would find her eighteen-year old granddaughter in school on a Saturday evening.

“I bring fish for you,” she said, holding out some plastic bags.

Back at my apartment, we unpacked fish, plantain, spices, palm oil, yam, pepper. How could I tell her that I did not cook; did not really know how, especially did not know what to do with smoked fish and palm oil? That the gas cooker in my kitchen sat bemoaning its uselessness. That I nodded and said, “Mmm mmm,” to my mother whenever at the beginning of a new semester she admonished me not to set the kitchen on fire. That I was liable to throw the fish away because it ‘smelled’ and would go bad under my watch.

I thanked her instead. I did not want her to ask me what I would do when war broke out and I could not cook.

We sat in my room. She sipped a soft drink because I had nothing else to offer and because she said, “No, no,” when I wanted to go out and buy food. The silence made me restless and I longed to fill it, but you can only ask, “How your body? Home people? Sapele?” once.

She seemed content to look at me. Maybe I reminded her of her daughter. After a long time in which I started feeling uncomfortable and wished she would go before my friends came along, she broached the subject of language and war.

I let my silence speak for me.

After she lost her vitality, she came to live with us. Sometimes she would talk to no one in particular; it was no longer surprising to find her in her room alone, chatting. My mother made sure she was always within eye view because she could wander off into the sunset, her legs possessing an agility incongruent with the rest of her. By then, I was hardly home and when I was, I retreated to my world of youthful infallibility, busy with things I have no recollection of.

When she died, I felt the general sorrow, which accompanies loss of human life, and the particular sorrow that haunts a child who watches her mother grieve.

I am thinking of my grandmother because as I embark on a new series on motherhood and invite people to tell their stories, I wonder about the blank spaces in her life, which I cannot fill. I realize I did not do enough to bridge the gulf between us; there are languages other than pidgin and her dialect. My active presence is a language I denied her.